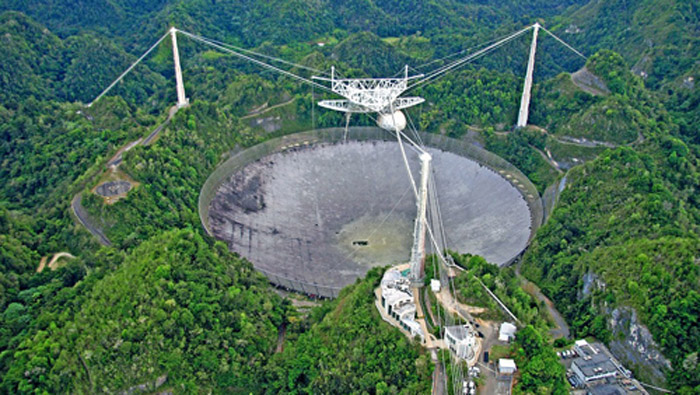 It was to solve the problem of spatial resolution that in 1960 William E.Gordon of Cornell University proposed to build the Arecibo antenna 305 m in diameter in Puerto Rico. The place was chosen because it is the American territory (with Commonwealth status) located closest to the equator which also facilitates the study of planets and other stars (asteroids, pulsars, Milky Way, etc.). during their transit above the parable.

Gordon first intended to use the antenna as radar to study the ionosphere but of course astronomers took the opportunity to entrust him with radio astronomy programs.

The disc was built in a cenote, a limestone depression of about 480000 m2. The parable was initially a tight network of wire and then in 1974, it was replaced by 38778 accurately fitted aluminum perforated panels. Its effective collecting surface is 73000 m2.

Arecibo entered into service on November 1, 1963. The space under the parable being accessible as shown in the photo below, in 1997 a Gregorian hearth was installed as well as secondary and tertiary reflectors, extending its working strip between 1- 10 GHz.

The platform of the receiver is suspended 150 m above the dish. It weighs 900 tons and is maintained by 18 cables connected to 3 turns in reinforced concrete of 111 m and 81 m of height. Note that one of the cables broke in 2014 following a magnitude 6.4 earthquake. However, the damage was minor. This platform can move along a 93 m arc forming the azimuthal arm which allows the radio telescope to cover a 40 ° angle between the declination of -1 ° and + 38 °.

In parallel, at the instigation of the SETI Institute and Carl Sagan, Arecibo has a permanent SETI monitoring facility that works in parallel with the ongoing radioastronomy programs. The 2380 MHz (12.6 cm) transmitter was sometimes used as part of SETI, notably in 1974 to send the famous “Arecibo message” to the M13 globular cluster. It has since been replaced by a more powerful transmitter at 2400 MHz. We will come back to this in the article on the SETI @ Home program.

The budget given to the Arecibo Observatory by the NSF, its principal financier, which was $ 10 million in the early 2000s has fallen by more than 80% and will be further reduced in the future. Even NASA stopped financing its radar between 2001 and 2006 but granted it a new envelope in 2010. Currently, according to the years the observatory receives between 2 and 3 million dollars to ensure the maintenance but it can not survive with so little money, which explains the transfer of its management to other organizations. In fact, the Arecibo observatory was managed until 2011 by Cornell University and the NSF informed it that Arecibo funding would not be renewed. Arecibo is now under the responsibility of two US organizations (SRI International and USRA) and the Metropolitan University of Puerto Rico (UMET). But the future of the observatory remains uncertain.

About 140 people work permanently in Arecibo to ensure the operation of the site. It receives about 200 researchers each year as well as students completing their master’s or PhD thesis. The site is also open to the public and schools but access depends on weather and observation programs.

The Future of the Universe 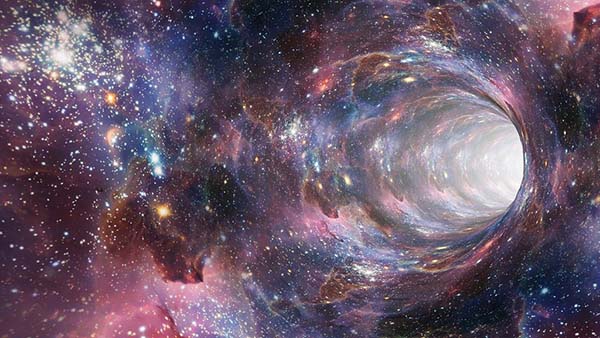 Let us look at the future of the Universe to understand what will become of the stars in the long term and what would be the possibilities of survival in a universe that will become colder and whose energy resources will be exhausted. Our tool is the Big Bang theory that describes not only the past of the universe but also its future. Taking place in eons that are in multiples of billions of billions of years or even more, we can assume that no one will be there to describe what is really happening or to rectify our assumptions. However, intellectually the future is always an exciting subject, even if by nature it is close to science fiction with all the possible slippages. But by strictly and simply applying the laws of physics and thermodynamics, this future remains predictable despite a certain margin of inaccuracy related to the properties of stars and processes that have a wide range of features including functions mass and body temperature.